This post reviews the R&D investment among the top-10 most innovative economies in the world according the Global Innovation Index or GII (Cornell University, INSEAD, & WIPO, 2017), in comparison to Spain. For the purpose of visualising the innovation index for each country, the GII ranking has been included alongside each country´s name in all the figures.

First, a review on the gross domestic expenditure in R&D (GERD) based on the most recent data available (UNESCO, 2015) has been prepared in the Figure below. 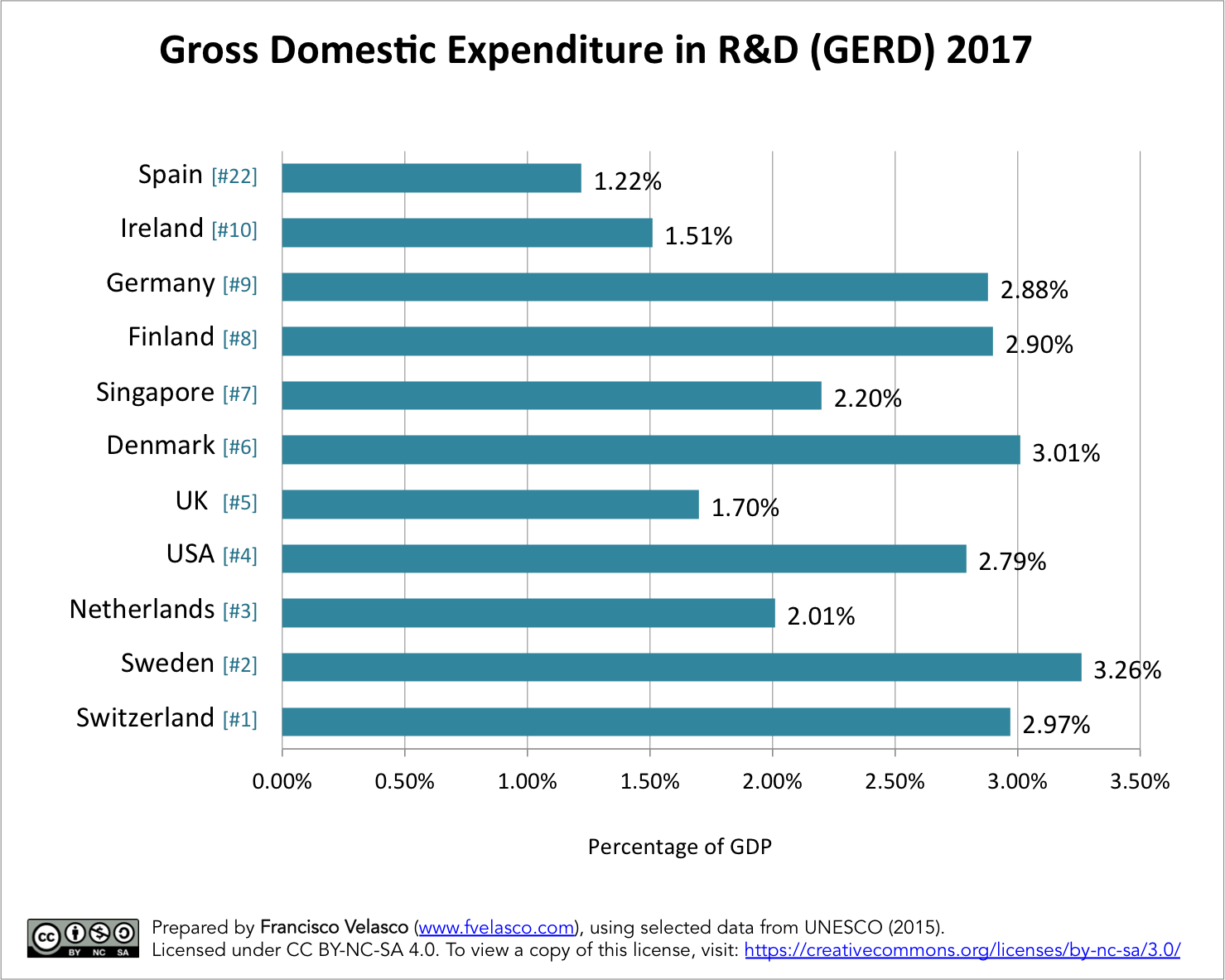 It is observed a group of greater investors in R&D, formed by Sweden, Denmark, Finland, Germany and USA (2.8 – 3.3% GDP expenditure in R&D last year), followed by a second group formed by Singapore (2,2% GDP) and Netherlands (2-2.2% GDP) and a third group of average expenditure ranking 1.22%-1,7% GDP formed by UK, Ireland and Spain. There is no linear correlation between the ranking in the GII and the spending in R&D, which is a predictable output considering that GII is built from a compendium of indicators including GERD.

Second, an analysis on the expenditure by top-global corporations for the same sample of countries has been made by looking at the  on the average R&D expenditure by the top-3 global companies in each country, using data from the Joint Research Council (JRC, 2016), and is shown in the Figure below. 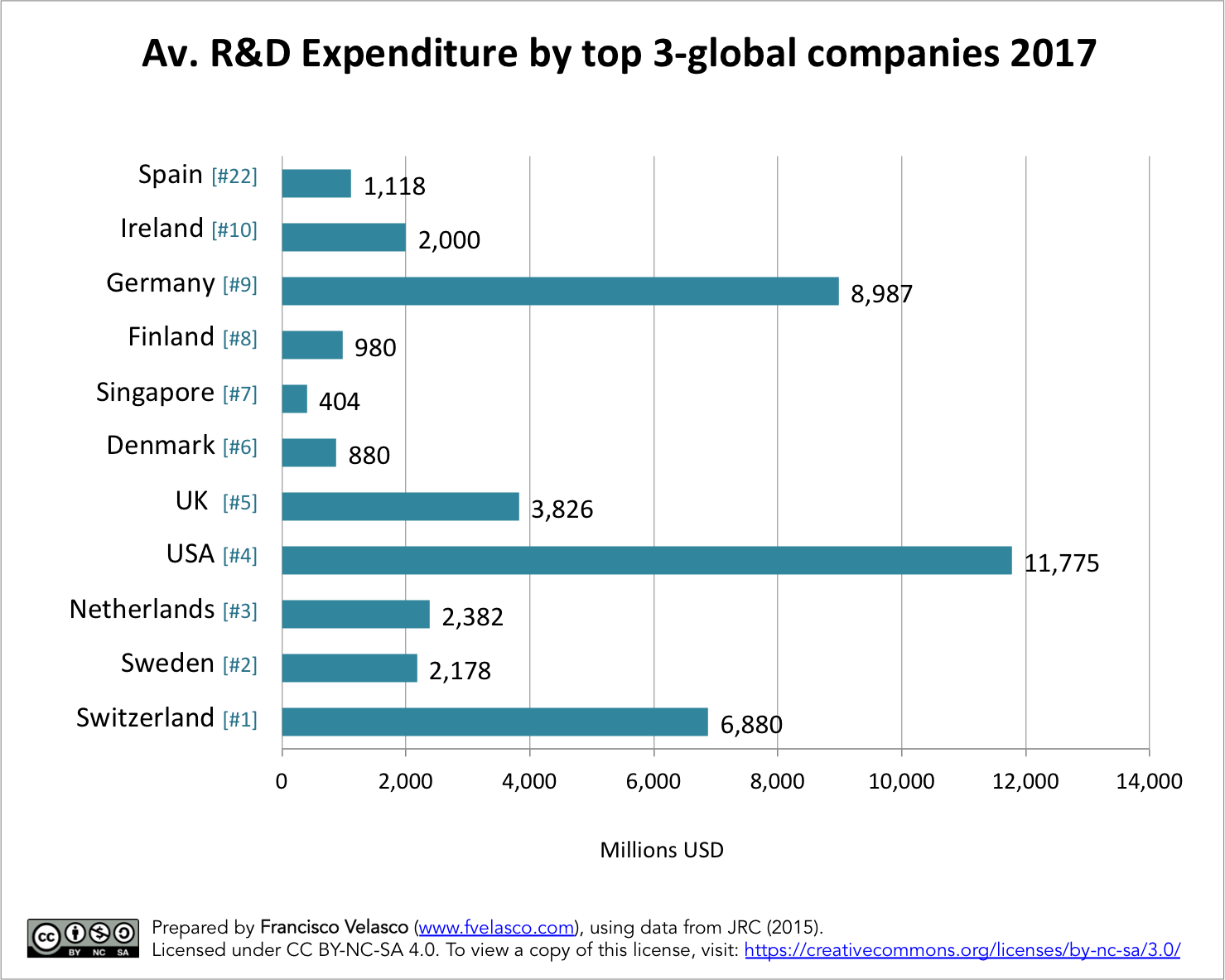 It can be observed a considerable difference in comparison to the gross domestic data earlier. USA is the listed country with greatest average expenditure in R&D by their 3-top global companies (totalling $11,775 million), followed by Germany ($8,987 million) and Switzerland (totalling $6,880 million). Spain ranked relatively high in terms of average expenditure by its top-3 global companies, with a total of $1,118 million and higher than Singapore, Denmark or Finland.

The data reviewed shows interesting insights about the role that top global corporations may have in the national R&D investment landscape in many countries. Spain, while ranking the 22nd position in terms of global innovation and having a relatively low gross domestic expenditure in R&D (1,22% GDP), shows a comparatively high average investment by global companies ($1,118 million), being the 13th greatest investor in the world in terms of average R&D investment among its top-3 global corporations. This is due to the high intensity of R&D activity by companies such as Santander Bank, Telefonica and Amadeus, and highlights a clear gap in comparison to the country´s R&D intensity.

Public policies on R&D and innovation have proved to make a considerable impact on economy in most countries. The range of strategies adopted by governments is so wide and complex that it is difficult to establish a comparison among them, or to make a forecast on the potential outcomes from adopting one or other strategies. Thus, to ease the policy design process there is a need to outline a model that allows visualising the possible strategies and instruments available. 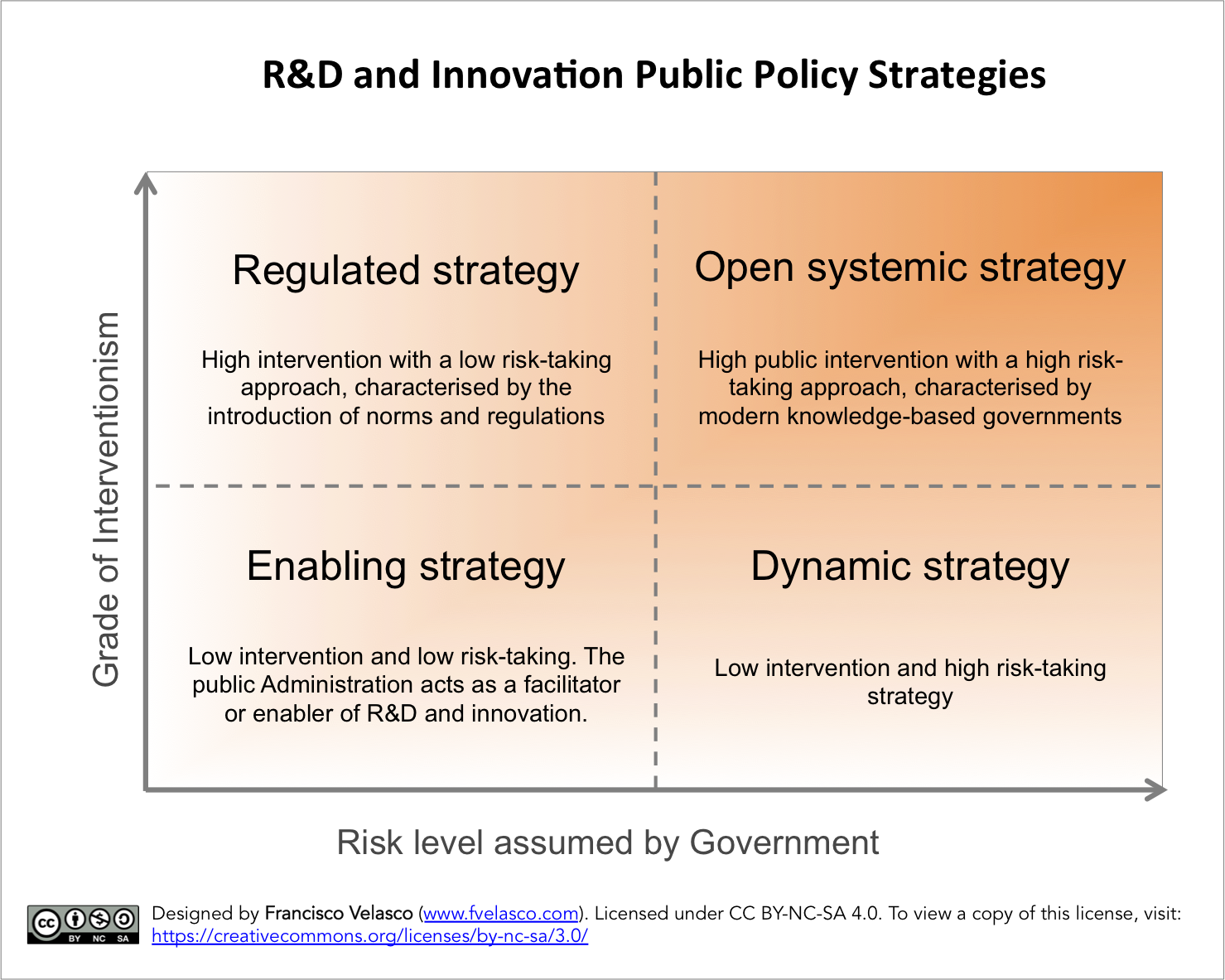 An attempt has been made to map some of the most common instruments (Di Comite & Kancs, 2015) in the proposed matrix as shown below. This mapped model is yet to be developed further and there is a likely misreading of some of the instruments. I will be happy to listen your views! 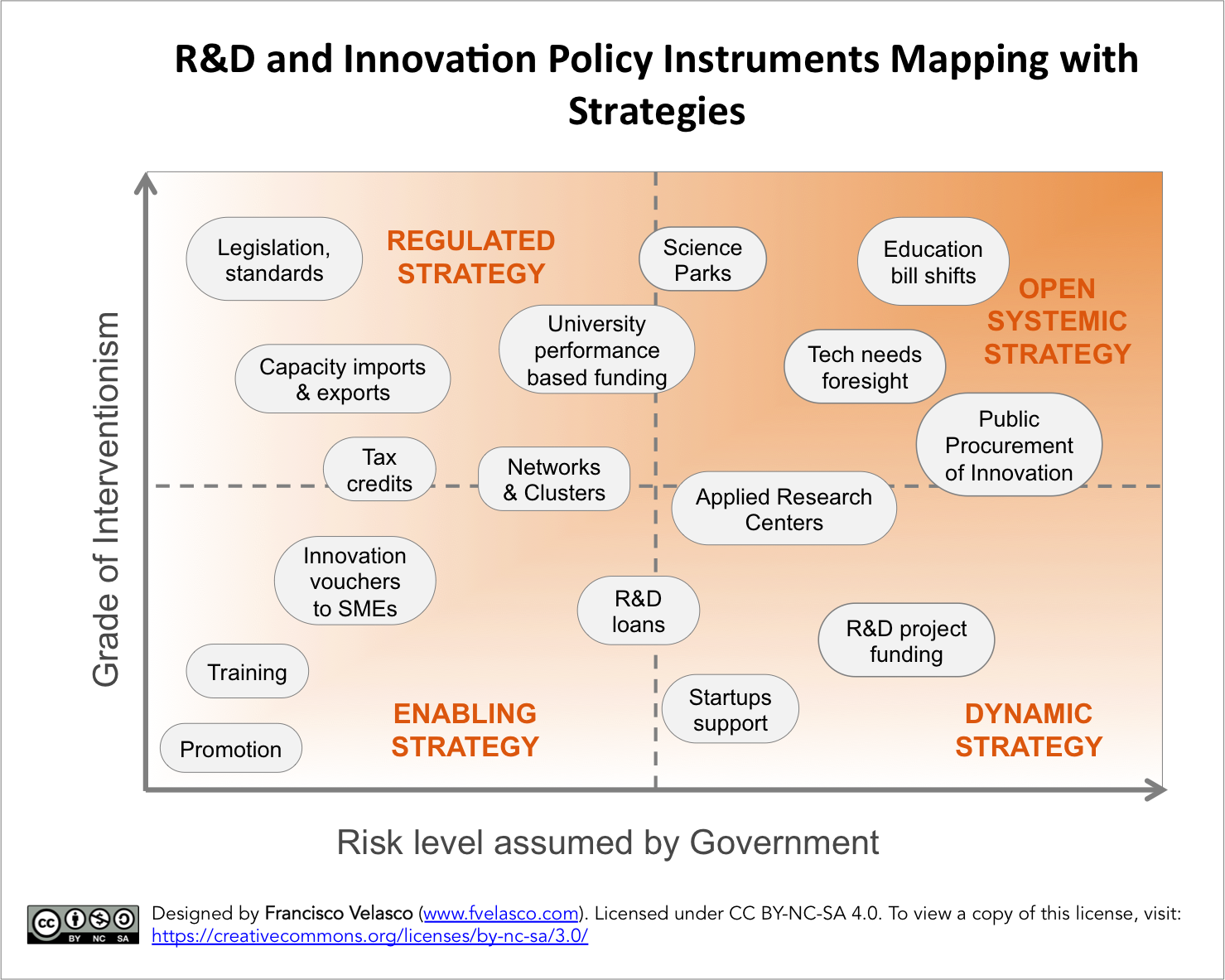 An explanation both figures above is provided:

The proposed model is subject to discussion and has no scientific grounds. However, it is based on fieldwork observation and provides the advantage of being simple and building on two solid parameters (interventionism and risk). The model may aid the strategy design process because allows understanding some underlying implications of adopting specific strategies, and designing the appropriate instrument policy mix for each country. I am intending to refine and improve some of the assumptions, and I will be happy to hear your comments!